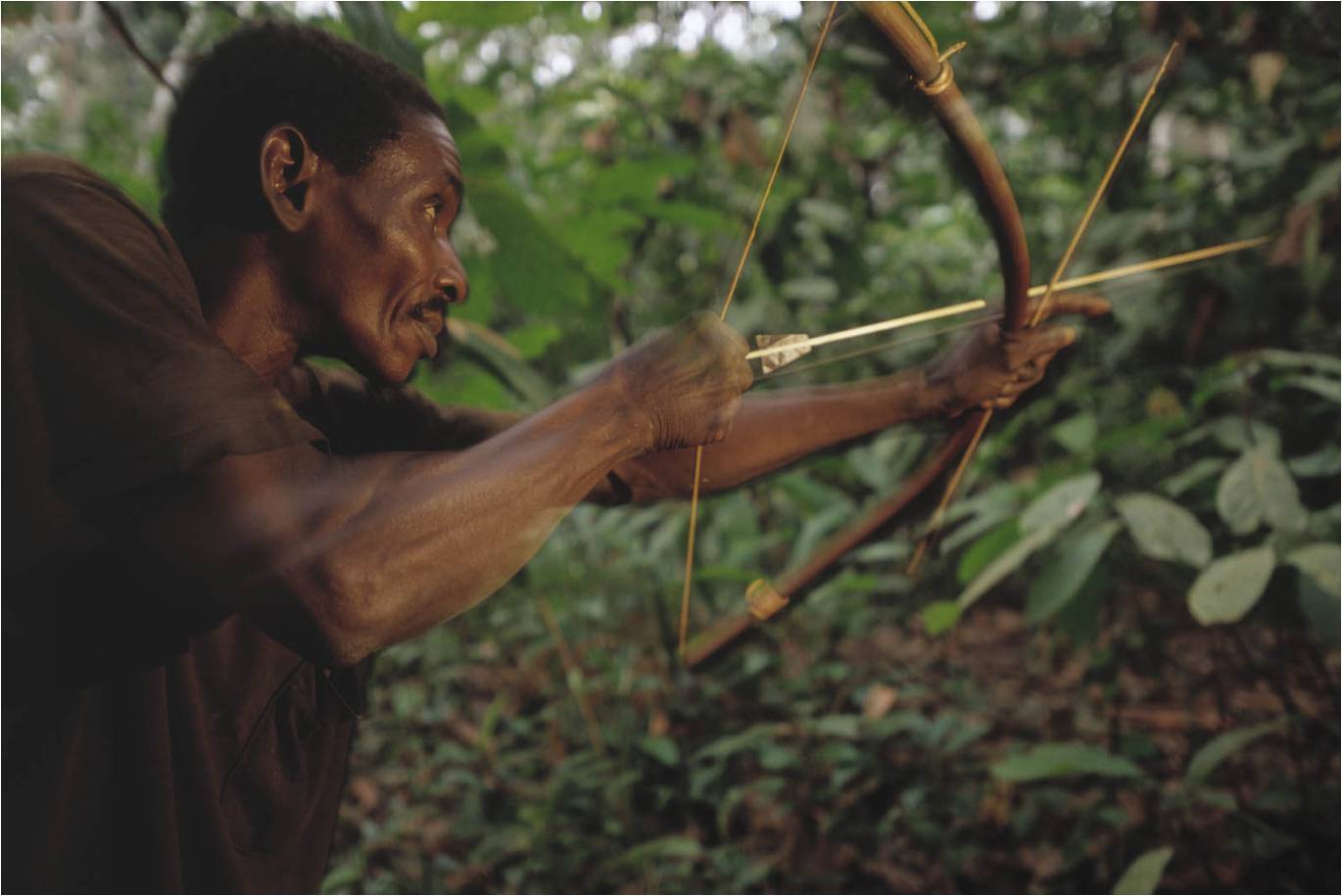 Bonobos are classified as endangered on the IUCN Red List, i.e. facing a very high risk of extinction in the near future. For several reasons, it has been difficult to collect reliable population estimates of bonobos. They inhabit a remote, densely forested area, most of which is accessible only by boat or bush plane. Research was disrupted since the early 1990s by political unrest, culminating in the Congo Wars (1996-2003). Current estimates range from 10,000 to 20,000 bonobos left in the wild—but what is clear is that the population, small to begin with, is fragmented and decreasing.

The collective threats impacting wild bonobos include: poaching, civil unrest, habitat degradation, and a lack of information about the species. Disease transmission also poses a greater threat as human contact increases; many gorillas and chimpanzees have succumbed to the ebola virus.

Bushmeat Hunting
Bushmeat hunting is the greatest threat to wild bonobo populations. Traditional taboos, which once protected bonobos in many areas, are breaking down in the face of economic desperation and human population pressure. In a region where more than 90% of residents can only afford to eat one meal each day, people are increasingly turning to wild sources for meat, both for sustenance and for profit in the commercial bushmeat trade. Due to years of war and insufficient infrastructure, the journey to marketplaces is long and arduous; smoked meat is one of the only commodities durable enough to withstand the trek. Because bonobos only bear offspring every 4 to 5 years, the population is slow to regenerate.

Congo War
The Congo War, which ended in 2003, claimed more than 5 million lives. Extreme poverty, degraded infrastructure, and social impacts have led to increased pressures on natural resources and wildlife.
Agricultural Encroachment
Subsistence agriculture in the Congo region relies on slash and burn farming, which is the practice of cutting and burning trees and vegetation to clear plots for planting crops. This practice quickly depletes the soil of its natural nutrients and requires the clearing of new plots every few planting cycles, driving agricultural activity deeper into the rainforest and encroaching upon bonobo habitat. As the Congo is achieving greater political stability, large-scale industrial agriculture is also posing a larger threat. Industrial agriculture requires vast amounts of land and resources and could come into conflict with conservation aims.
Logging
Despite a government moratorium on industrial logging concessions in the Congo, logging—both legal and illegal—continues. Logging in this region contributes to the degradation and destruction of bonobo habitat. It also allows hunters to enter previously inaccessible areas of the forest via logging roads, perpetuating the bushmeat trade.

Successful conservation requires a great deal of knowledge about what a species needs for survival and the factors that contribute to its endangerment. Bonobos were the last of the great apes to be discovered and are still understudied. More information is needed about bonobo population size, range, habitat, and behavior to ensure their long-term survival. Since the end of the Congo War in 2003, research has increased dramatically. There is a movement within the bonobo conservation community to share information and create a coordinated conservation strategy, a process supported by the USFWS Great Ape Conservation Fund, ARCUS Foundation, and the IUCN Species Survival Commission. The Max Planck Institute hosts the A.P.E.S database, “a comprehensive database of all that is known about great ape distribution throughout their range, in order to better conserve them.”

The Bonobo Conservation Initiative (BCI) is the only international organization dedicated solely to conservation of bonobos in their natural habitat.