Bonobos have been cherished, revered, and even feared by indigenous people of the Congo Basin, who recognize bonobos as relatives from our distant past. Handed down generation to generation through the oral tradition, legends about bonobos have perpetuated traditional taboos against hunting these uncommon apes. Many stories share one basic theme: “Salisa bonobo, mpe bonobo akosalisa yo!”—help the bonobo and the bonobo will help you!

BCI and partners have been gathering stories and songs from villagers throughout the Bonobo Peace Forest. This work is inspired by the pioneering research of Dr. Takayoshi Kano from Kyoto University, Japan. The beliefs of the Mongandu people of Congo, as expressed in these folk tales, were fundamental to Kano’s choice of Wamba as a long-term study site. There, people respect and protect bonobos as kin.

Here are a few of the Mongandu tales, which are usually sung by the people of Wamba.

Why Bonobo Lives in the Forest

A long time ago, bonobo and people lived together in the village. They worked and played together. The bonobo was no different from the people. Back then, everybody was naked.

One day a lifeke (Raphia palm) came to the village. As a charm, it knitted a bekuwa (cloth) from its own husk. The village elders were very happy and gave everyone in the village a small piece of the cloth. At this time, the bonobo was away in the forest. When he returned, the village had changed. All the men and women covered their front side with the cloth. Now, just the bonobo walked around as he was created (naked).

He ran to the village elder and said “Give me a bekuwa too!”

“I was in the forest,” the bonobo replied. The elder shook his head and said, “We entirely forgot about you. The cloth has all been divided among the people and there isn’t a piece left.”

“Alright then,” said the bonobo, “I’ll be naked like all the animals.” Then it shouted, “I wouldn’t live naked in the village even if I died! I’ll go into the forest and eat fruit and sprouts and will never come back to the village again.”

—Transcribed by Takayoshi Kano, from Fire of Elia

As the bonobo said, he went to the forest and never came back. When the bonobo went into the forest he took a nest of white ants, which an elder was using as a heating stone in his room. Because the nest looked very red beside the fire, the bonobo thought it was the fire itself.

In the forest the bonobo was probably thinking about using the “fire” for many things. But the “fire” it brought to the forest never burned. Even now the bonobo gathers some nests of white ants, piles them up and smashes them like making a fire. That’s why people call it “Bonobo’s fire.”

—Transcribed by Takayoshi Kano, from Fire of Elia

Man did not know that beya, bekau, bolingo, batohe, and basenda can be eaten as food. One day the man made a long journey into the forest. He finished all his food and did not have anything to eat. He was so tired that he fell down, weak from hunger. A bonobo found him lying down on the ground and thinking that the man was ill, the bonobo wanted to help him. The bonobo consulted the man and found that he wasn’t really ill. His problem was only that he was hungry.

At this time, the bonobo gathered his uncooked food, including beya, bekau, bolingo, batohe, and basenda and gave them to the man. Thus, the man ate bonobo’s food for the first time. And he was well satisfied with this food.

When he came back to the village, he tried to cook beya and bekau, and found also that beya and bekau can be eaten after cooking. 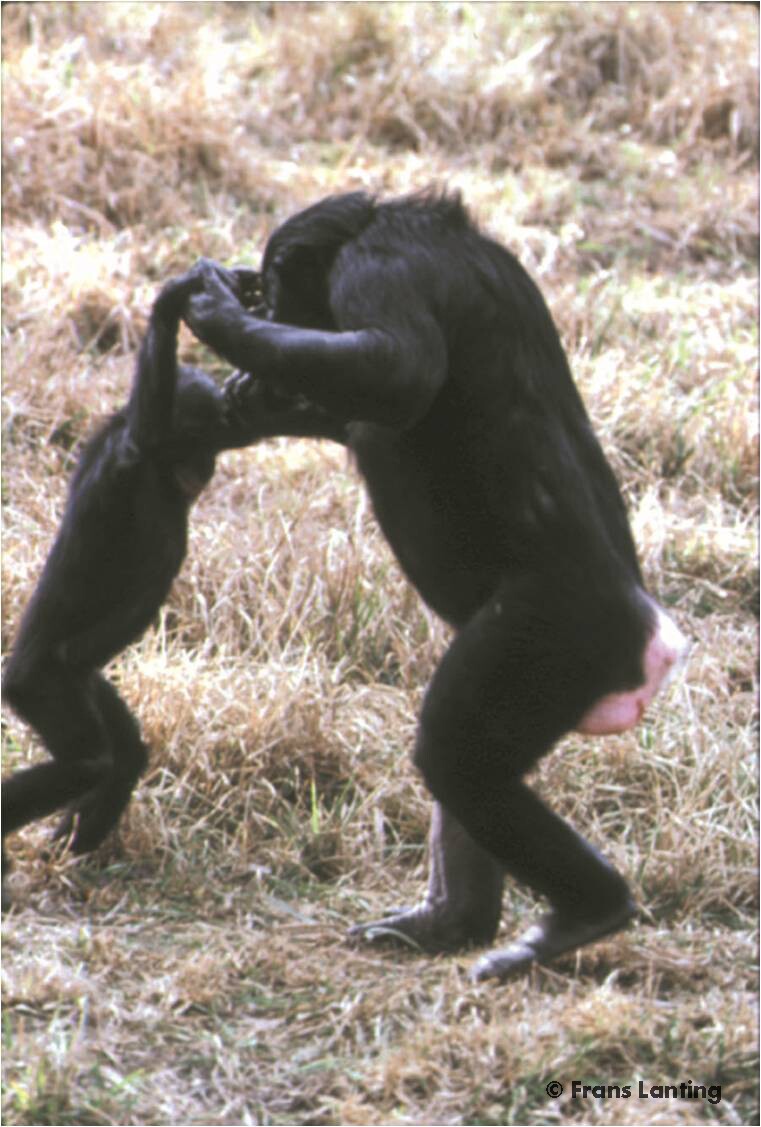