Gloria Steinem loves bonobos... and other HUGE news from NYC! 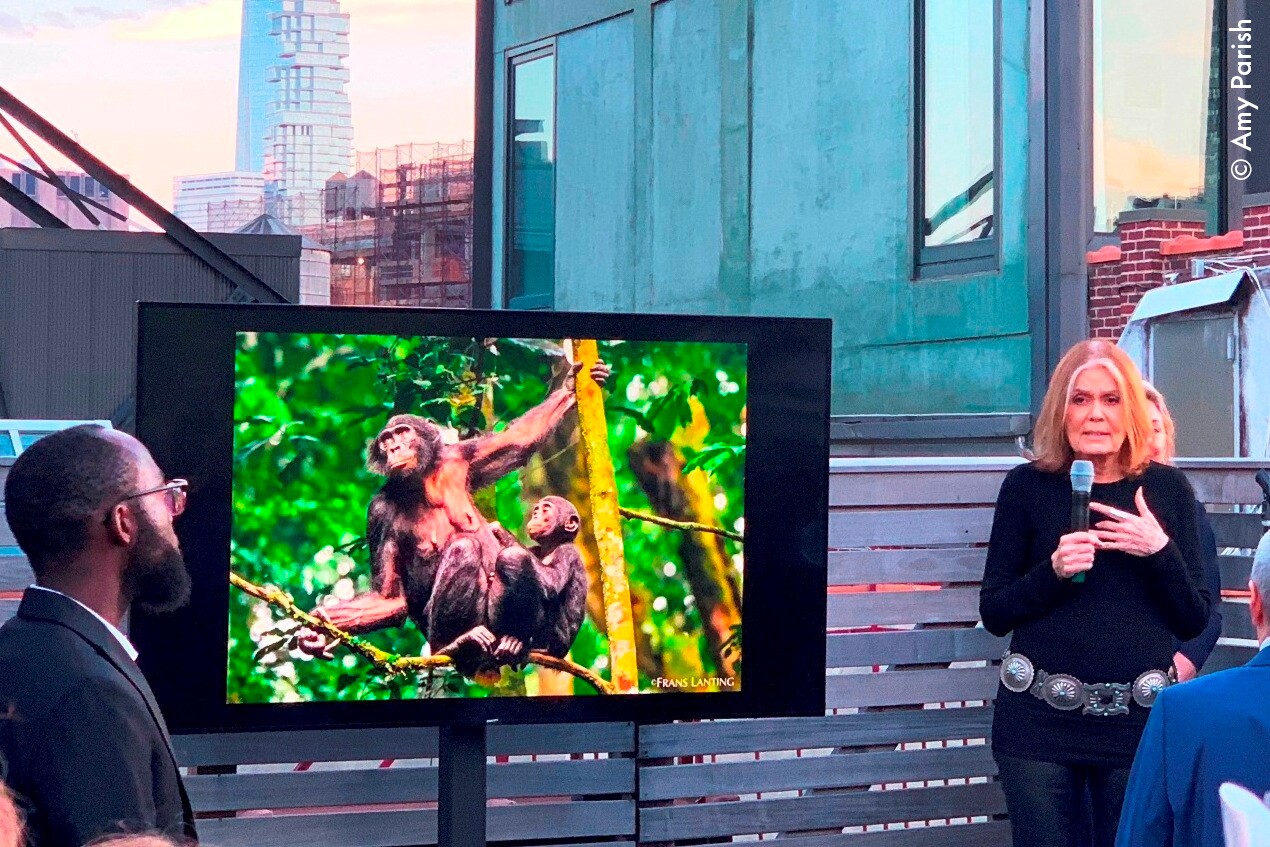 May 16 was truly a day to remember! Events kicked off with a press conference at the United Nations headquarters in New York City. H.E. Ambassador Ignace Gata Mavita, the Democratic Republic of Congo’s ambassador to the UN, announced the DRC’s official endorsement of the Bonobo Peace Forest. Actor, author, and activist Ashley Judd gave a passionate speech about the importance of bonobos and the example they set for a gender-equal society. She delivered her Care2 petition on behalf of bonobos—with over 250,000 signatures!—to the ambassador.

BCI president Sally Jewell Coxe spoke about the Peace Forest’s evolution over the past twenty years and highlighted the fundamental role of partnership and cooperation. She introduced a new short film, courtesy of James Brundige and Nature Needs Half and narrated by Ashley Judd, that takes viewers into the heart of the bonobo habitat and shows the Bonobo Peace Forest at work. Humphrey Lotana, son of BCI partner and Vie Sauvage founder Albert Lotana Lokasola, shared what the Kokolopori Bonobo Reserve and other Peace Forest sites mean to the local communities. And Trammell Crow, founder of EarthX, announced that EarthX will offset its carbon footprint by investing in the Bonobo Peace Forest!

And that’s not all! A brand new song and video by top Congolese musician Werrason made its debut at the press conference. BONOBO SOS is part of an upcoming campaign aimed at raising awareness and stopping bonobo hunting throughout the DRC. Many thanks to Wilhelma Zoo for supporting this effort! The celebration of the Peace Forest continued into the evening with a gala fundraiser hosted by Don Capoccia and Tommie Pegues. Speakers Ashley Judd and Sally Coxe were joined by none other than feminist icon (and bonobo fan!) Gloria Steinem. Wildlife artist Russ Ronat of Project Holocene auctioned two of his bonobo paintings and made a live painting at the event. (He also did projections of his art around NYC to raise further awareness about bonobos and their endangered plight. Take a look on our Instagram feed!) We were so delighted to see everyone who could join us at these events.

The party may be over, but the fun continues with our ongoing Silent Auction. Bid on amazing experiences including luxury Caribbean vacations, 2020 Superbowl tickets, Metropolitan Opera packages in NYC, or a Broadway VIP Insider's Package where you will go backstage and meet the cast of Hamilton before their performance! Visit www.bidr.co/events/bonobo or text 'bonobo' to 843.606.5995 to view auction items. Auction is open until June 15th so hurry before you get outbid on your experience!

Thanks to Care2, EarthX, Wilhelma Zoo and everyone who made our NYC events a success! And thanks to YOU for helping the Peace Forest thrive!