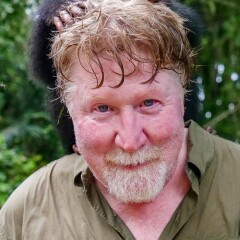 James Brundige, Board of Directors

Forty years ago James Brundige discovered that making films was a creative means to pursuse his love for adventure in wild nature. Since then he has worked on television shows for PBS, BBC, TBS, Discovery, ABC, CBS, NBC, and National Geographic Television. His company, First Light Films, has produced environmental films from the Amazon jungle to Mt. Everest, from the South Pole to the high Arctic. With a firm foundation in science, he strives to communicate the work of conservation heroes committed to preserving our natural heritage for future generations.

This mission took James to the Congo, where he fell in love with bonobos and the impressive work BCI is doing to preserve their endangered habitat. Also on the board of Nature Needs Half, James recognizes the critical importance of saving the word’s remaining rainforest. Albert Lokasolo said it best in James’ film about BCI : “protecting the bonobos is the best way to protect the forest, because the bonobos and the forest live together”.